As architectural is one of my favorite things to shoot, I was so excited when Freddy's Frozen Custard called me about a photo shoot for their new McDonough store. In addition, this was the very first project after I got my new Canon TS-E 24mm 1:3.5 L II lens, so I was even more excited and couldn't wait to shoot.

To shoot Freddy's exterior lights on with empty parking lot, I started fairly early before sunrise. I didn't get a multi-color dawn with pink and orange cloud that I was hoping for, but I got to capture a few shots when the sky had the mysterious blue hue. 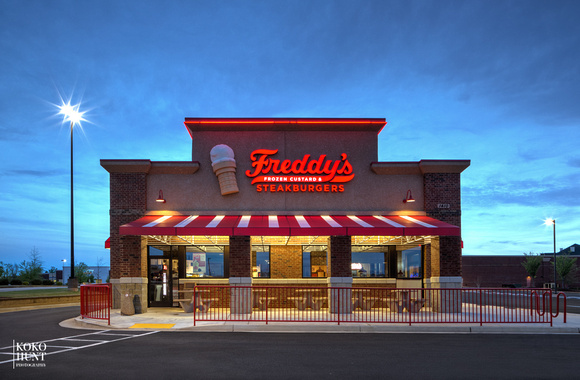 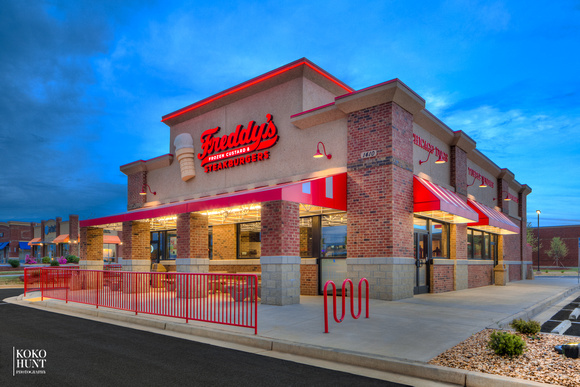 During dawn, my favorite shade of blue lasts only for a few minutes, sometimes a couple of minutes, so it was very important that I get everything setup and ready to go when the right moment arrived. Sure enough, right after I clicked the last few shots, the atmosphere brightened up quickly and the exterior lights turned off. My assistant, who can see and smell Starbucks from miles away, told me that she has seen one on the way, so we drove there and had a short break until the store manager came in to let us inside for an interior shoot.

The interior shoot was a tricky one. Tons of natural light from large window walls, another type of light from the ceiling, extreme hot spots in many areas, not so bright in other areas. "Post with Mike Kelley Photoshop tactics", I thought. And I did. Except that I didn't have the luxury of taking the time to light and shoot each element at a time. But his technique would still work if I can get right shots with right exposures. Plus my trusty onOne Perfect Photo Suite 9.5 (http://www.on1.com/) is a tool that lets me be as creative or flexible as I want to be. 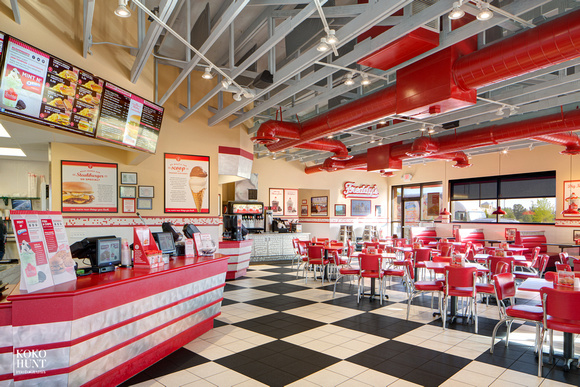 I know many old school photographers from the film days shun post production. Yes, yes, I know, we are to make things right in the camera. But when time and environment are limited, knowing what tools I can use in post, such as Lightroom, Photoshop and other plug-ins like onOne Perfect Photo Suite, helps me to know what I need to shoot in the minimum time allowed, to bring my vision to life at the end. I like what HDR can do, but I don't like the obvious HDR look often time. So as tedious as it sounds, I use the concept of HDR but manually manipulate where, how much and how the layers are blended. 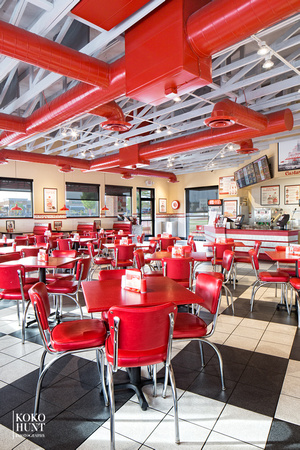 With the day time exterior shot, my shoot was over and it was almost time for the store to open for customers. The all American look and colors, and the deep, blue Southern Sky to boot. This shot was a single image and least touched up photo, but the punchy colors makes it look almost like a rendered drawing. 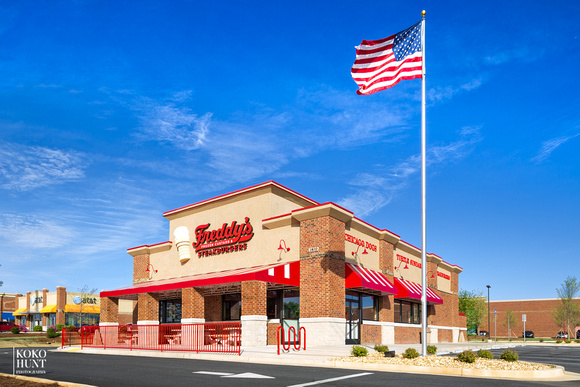 Overall, it was a really nice shoot. I did wish if I'd had a larger and brighter screen to tether for night time shoot, as using the LCD monitor for manual TS lens in the darkness was not so easy. But the lens is extremely sharp and I really love the moments of manually focusing the lens. Maybe I am somewhat old fashioned.

To learn more about Mike Kelley that I mentioned above, here are some links: