The past couple of months, I have been on this covert operation to plan a surprise, proposal shoot with a client from Texas. Zoltan was going to be on a vacation with his girlfriend, Anna, who grew up in North Georgia, and wanted to propose to her at the beautiful waterfalls she often visited when she was a child. Because there is no cell signal at the waterfall, we had to make a really solid plan (and a plan B for bad weather) beforehand. I asked him to send me a picture of himself and his girlfriend, so I could recognize them. Given the fact that it was the July 4th weekend, we expected many people to there, so that can pose some challenges and unexpected situations that disrupt our shoot plan. In preparation, I did the location scouting, sent Zoltan a picture with a diagram of our positions, weather reports, etc.

It was supposed to rain on that day. Well, thunder storm to be exact. But the thing about Georgia weather is that it can change at any minute, and you never know what you get in advance. I prayed for good weather, and fortunately, we did have beautiful sunny weather that lasted half of the day, but we had to move up the shoot time, just to make sure we wouldn't be hit by the afternoon shower.

When I got there, there were quite a few people enjoying the waterfall. I tried to decide where to position myself to get a good view with the least amount of obstacles. Then they came. Zoltan passed me as though he doesn't know me; Anna, his beautiful girlfriend, of course, had no idea what was about to happen. I had butterflies in my belly, then I saw real, tiny, bluish white butterflies flattered around and followed Zoltan and Anna, as they hiked up the cascades of the waterfall. 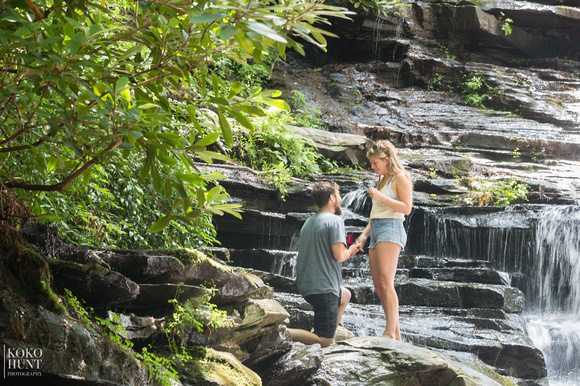 I aimed at Zoltan and Anna, ready to burst on my shutter, and just as Zoltan kneeled down, a lady who had no idea that I was there to shoot the surprise proposal got right in front of me (GASP!!) I had to move quickly on the murky ground and tried to reposition myself and recompose the shot. First shot was a bit shaky. But the rest went on smoothly.

People around me noticed what was happening and started to say "OMG", "Awwww", "Oh look!", but I didn't lift my eye away from the viewfinder. I felt a knot in my throat. It was so moving. While I was trying to focus on shooting, I couldn't help but to feel emotional about what I was witnessing. Anna fell on her knees immediately following Zoltan, and held onto him so tight. They kissed, she dropped on the cascading stone and started to cry. I could see her lips moving "I LOVE YOU". Goose bumps. What a privilege to be able to witness and capture such a delicate and beautiful, fleeting moment. After the ring was on her finger, everyone there clapped for the newly engaged couple. 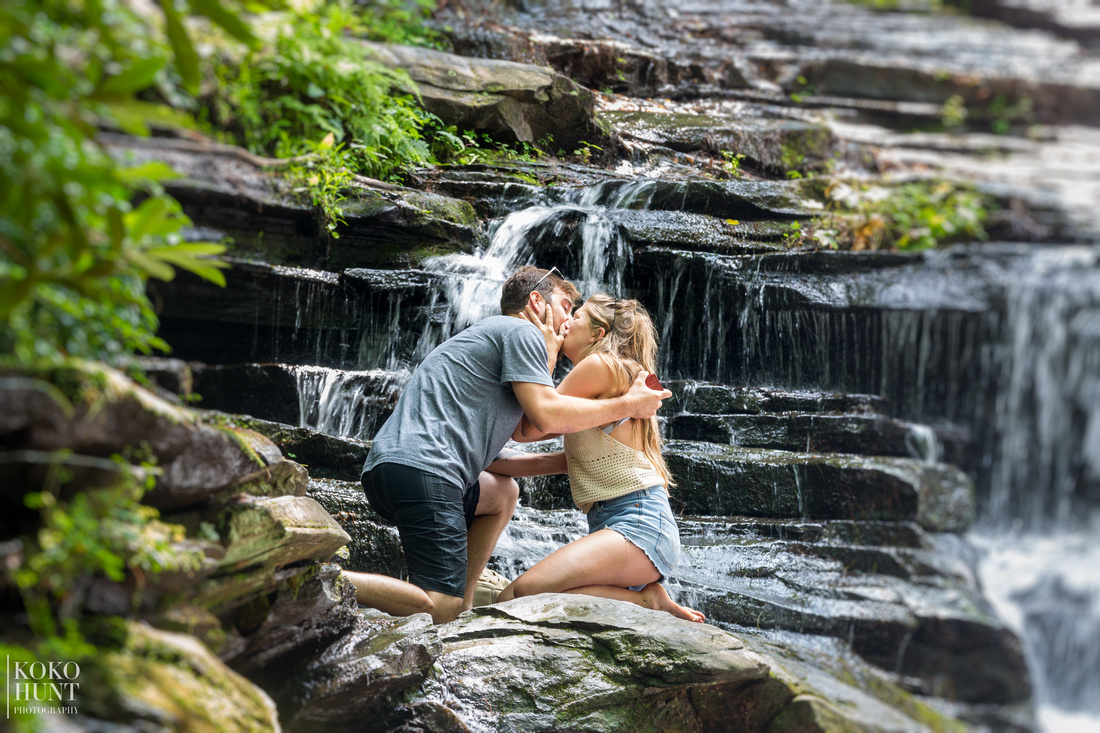 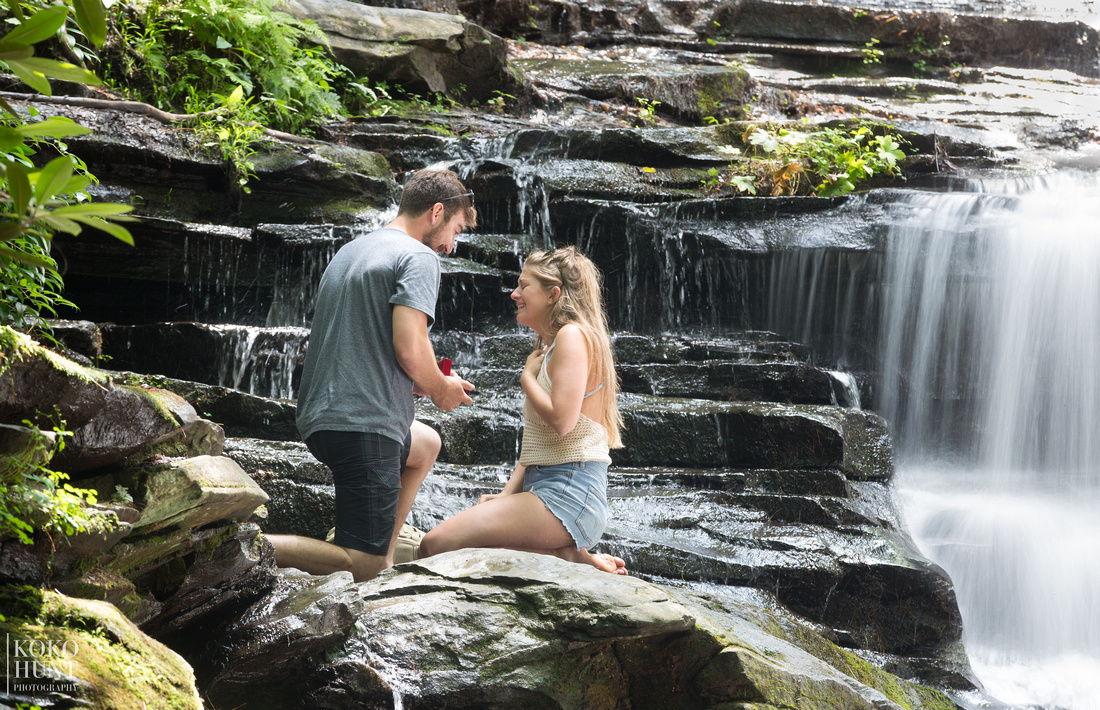 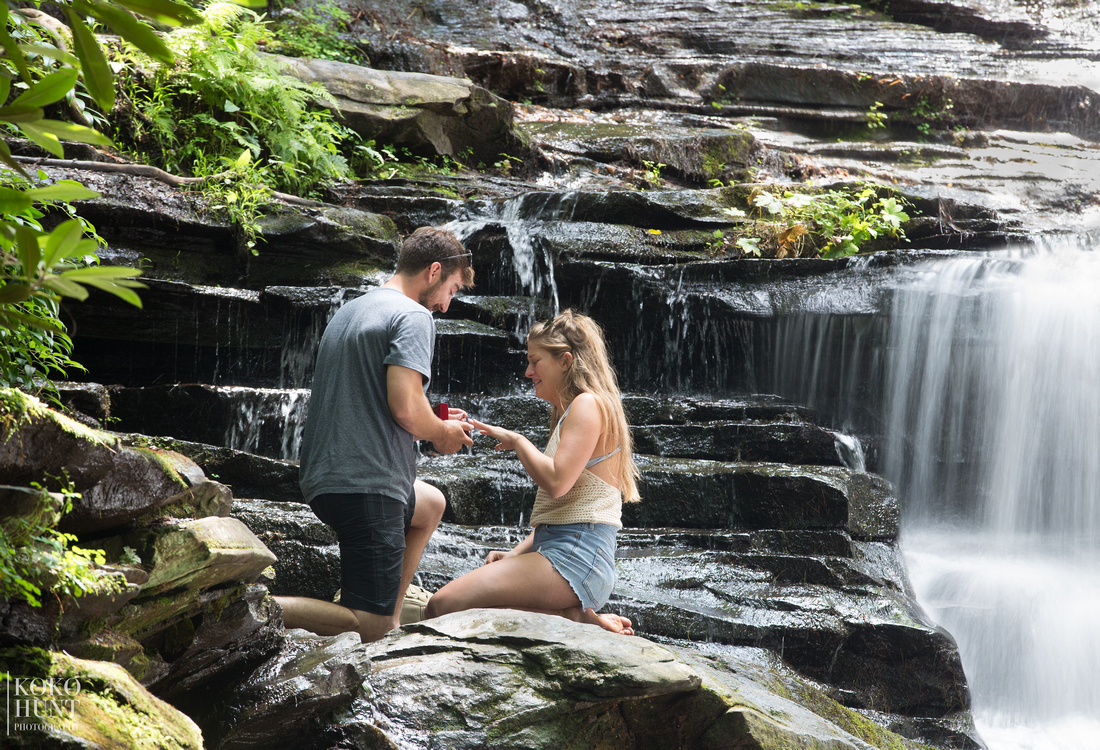 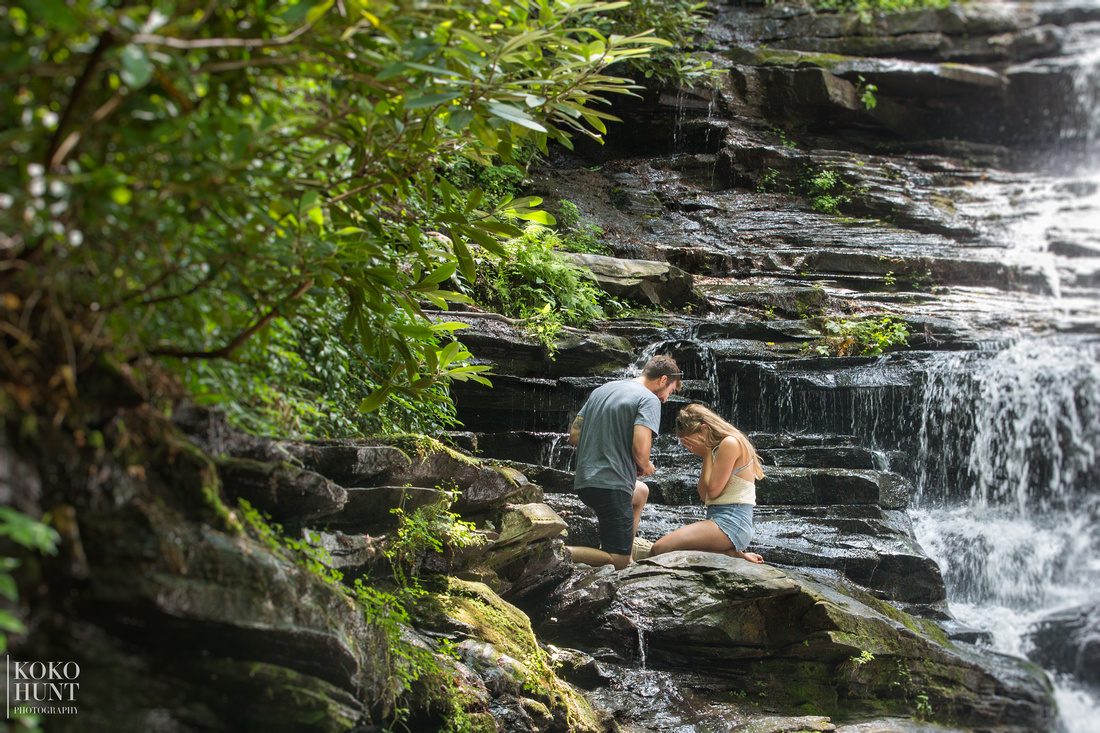 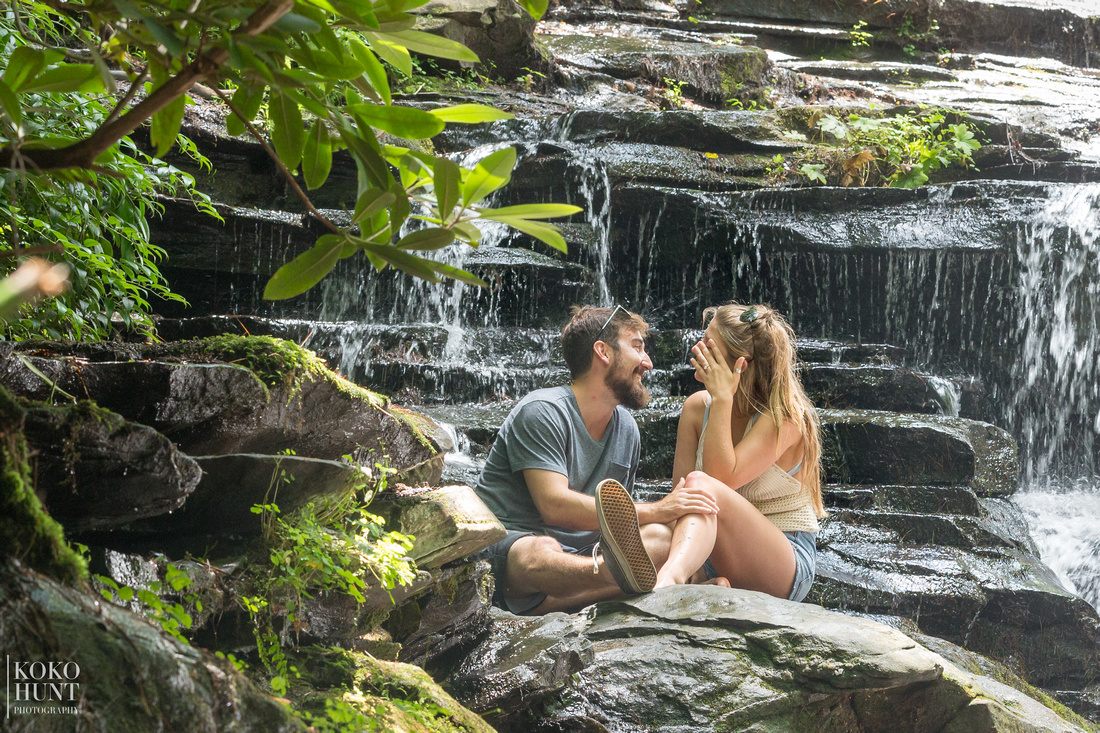 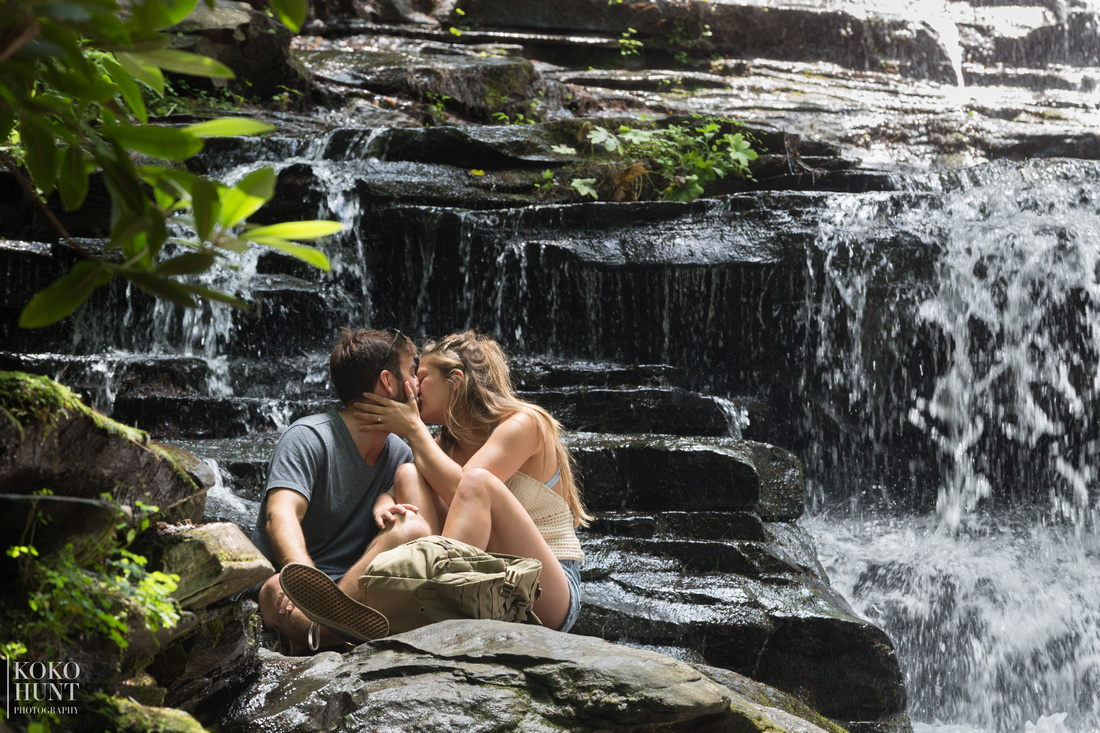 After they came down from the cascade, Zoltan asked if I wanted to have a champaign with them. Of course I had toasted to their beautiful future. Anna told me she had no idea, because he is usually not like this. Like planning everything meticulously? Zoltan wanted his proposal to be very special to her, and it was so clear he wanted to show her how much she means to him. He planned everything, followed up to make sure everything would work out the way they should. As he gazed at Anna, I couldn't help but to feel his kindness and gentle love for her. It's apparent Anna treasures him just the same. 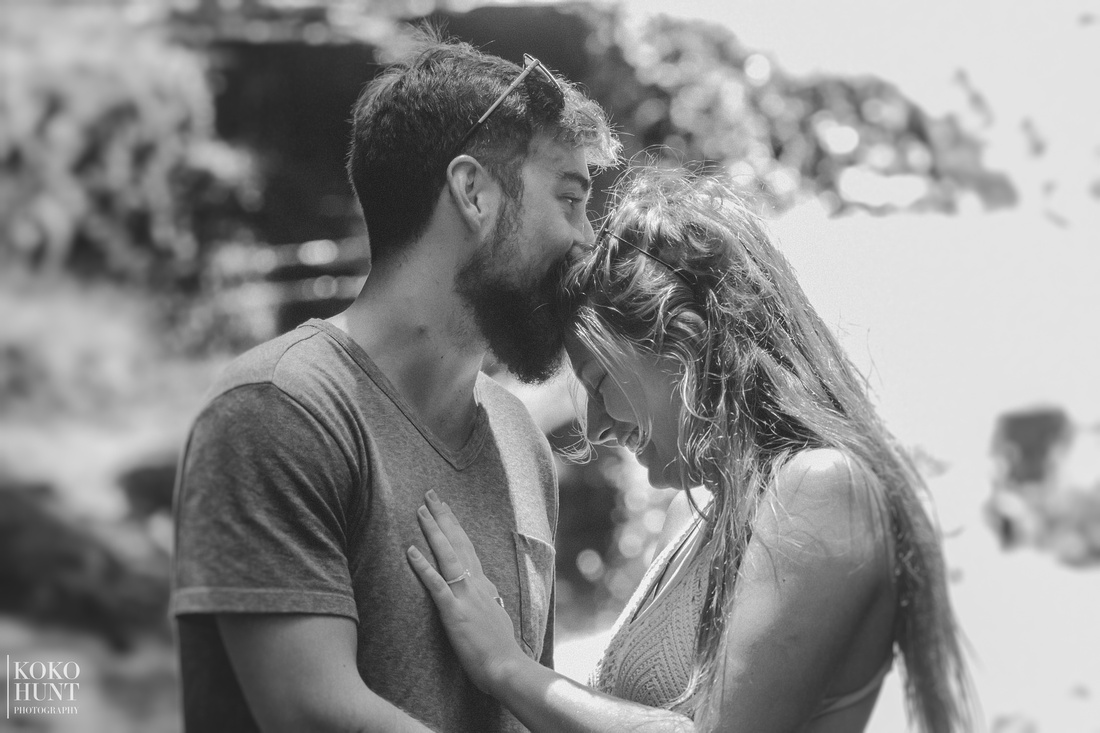 I was reminded of how beautiful true love is. Congratulations, Zoltan and Anna. I hope the day was everything you both hoped it to be. Thank you for allowing me to capture this sacred moment. I know you will share the story of how he planned a beautiful proposal and how it was so romantic and perfect in every way, and the bluish white butterflies flattered around your ankles at your childhood waterfall. Your children will share the story someday, and maybe their children also. I know I will...

Anna Nease(non-registered)
Thank you so much Koko. We so appreciate the great lengths you went through to capture our moment and we will treasure these beautiful photos for the rest of our lives. I am so thankful for these pictures, there was so much shock and emotion in that moment that I would have never been able to recall what happened with the clarity I do now. These photos truly do capture the pure joy and excitement we felt and we get to relive that moment over and over again every time we see them. Your genuine excitement and happiness for us after the fact felt like the bringing of the celebration that continues now as we share this time with our friends and family.

Thank you so much,